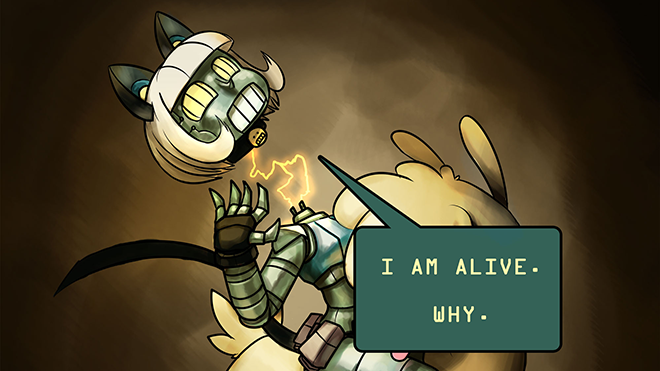 Well, turns out it took us a whole two (or is it three?) days to get over the initial shock, surprise and excitement at Skullgirls’ Indiegogo campaign having reached the 725k mark (And beyond!), but we’re back with a (mostly text) update of what’s going on and what comes up next.

But first, let us yet again thank everyone of you who donated, spread the word and supported (and still supports) us and the new game. We seriously can’t say it enough, but you guys rock, and we can assure you we will -not- disappoint. We pushed the FM2K engine well beyond its limits for the previous project, and we intend to push the Z-Engine likewise (even though the Z-Engine’s limits are considerably larger); We intend to give you guys the best game possible for this gift of an engine that you guys (and LabZero) have offered us.

Since we have gotten the engine (and some before) we have been getting questions about netplay and GGPO. We gave a short explanation of how that would work in a previous post, but we will expand it a bit more here.

GGPO is a bit of middleware that lets the game to be used multiplayer over a network. It was created by Tony Cannon (Co-founder of Shoryuken and EVO) and it’s widely regarded as the best networking software for fighting games. SUPPORT for the GGPO library is included in the Z-Engine, but GGPO itself is not, as it is a separate license. Since having good network multiplayer is one of the priorities of our game, tech wise, and having acquired an engine to use, the GGPO license is now one of the first (if not the first) items in our “shopping” list, as it would allow for the best multiplayer experience.

Which brings us to the next thing: The “shopping” list.

Right now, the game is being developed by a staff consisting of 100% voluntaries not receiving any economical compensation for their work. Obviously, this can’t continue forever if we’re to make a -serious- game out of this. Begin with the fact that there’s things to be acquired at certain points of the game’s development that will probably require more money than we could cough up on our own. GGPO license, for starters… Software, hardware, website hosting and maintenance, technical expertise from people we can’t ask to “volunteer” time for free, a gorillion other things if we ever wanted to port to consoles (not in the current plans, but technically doable with the Z-Engine)… Plus as before mentioned, the fact that apparently, game developers need to eat and have a roof over their heads (and somewhere to plug the computers into) to live and continue developing.

Making money, however, isn’t as easy as it sounds. It ain’t just opening a bag and asking you guys for your wallets while wearing clown masks and yelling “hold hands, this is an up stick”; and while we know some of you guys -would- actually throw the wallets in the bag (thank you!), a Kickstarter or Indiegogo campaign where you receive a bit of a reward for your patronage sounds like a better option, both for us and you, we think.

But again. Not as easy as it sounds, since there’s a lot of things to consider. Budget necessary to complete the game, salaries to be paid to the people helping us make it, costs of software, hardware, licensing, development and stuff; pile on to that the kickstarter costs, reward making costs, the fact that we have to -formally- establish the development team as a company or partnership, which brings up lawyer costs for some stuff that need to be legalese-written, taxes to be paid to the government, and more of that kind of stuff. It’s one of those things where having -less- than the money required (but still some money), is probably more troublesome than having no money at all.

So we need to figure all that out; Some of those things won’t become clear until we have started experimenting a bit with the engine, measuring time and effort required, talking with the people who’ll need to be paid, etcetera.

Cutting to the chase. We’d like this game to remain freeware, but somewhere in the future, there will need to be a point in which we make -at least- enough money to keep on developing with good quality and at a good pace without killing ourselves in the process. We’re trying to figure out just -when- and how that will happen, and we’ll let you know once it does.

But enough of what will need to be done. Let’s move on to what is being done.

M6:The Return of the DevTeam

Mentioned above was the fact that our entire team is still volunteers; Let’s make a team roster of who’s who and what’s up.

In the “Core” Development team, which includes game design and basic development, we’re led by Omari Smith (Nappy), who is our be all and end all when it comes to the game’s technical design. If it works like a charm, you can thank him. If it’s broken, OP or just plain stupid, you can probably blame one of us bugging him to actually try stuff, and said stuff not working (as he most likely told us it wouldn’t). Nappy is in charge of designing (With a bit of input from the rest of Core) and implementing the game’s mechanics, as well as of doing character animation.

Next up we have Jay Wright (MonkeyJay), whose job title and description are formally “Developer in charge of Awesome (and some snark)”. Jay does a bit of everything. Concept designing, art making, special FX & flair animation, character animation, smart-assing, etcetera. If it shines, sparkles, or just looks awesome (With no other words to describe it), Jay made it, or at least had a hand in the process. He also answers stuff around the web with his personal touch of Jayness.

Third there’s Lucas Ellinghaus (Leedin). Leedin is mostly in charge of making the actual character models, basic animations and proclaiming everything needs minute pixel fixing to look correct. While three out of five people in DevCore work in the game’s animation, Leedin’s probably the one taking the most time doing stuff and making sure it looks -just- right.

Fourth we have Francisco Copado (Anukan). Anukan is in charge of everything interfaceish (Menus, HUD and GUI, website and related materials design… Stuff like that), as well as of updating and maintaining the collective front-face of the team on the web. (He’s the one feeding the artificial construct we frankensteined to take charge of the site and twitter, and to answer most of the questions and posting the silly stuff to the interwebs).

Last, but far from least in Core, we have Lauren Faust (Lauren Faust). Lauren is the most recent addition to the team (and most probably the best); Lauren is responsible for the actual character design for the game, with some input from the rest of Core. You may know her for her work in Foster’s home for Imaginary Friends, My Little Pony: Friendship is Magic, Super Best Friends Forever and Galaxy Girls (which you should check out), for being in charge of the lizards at her house, or just for being SUPER AWESOME on the internet and real life.

New to the Team (Officially) is the Programming department, composed of Kenneth Leung (Pineapple) and Chris Robinson (Beta Carotene). Kenneth is the man secretly responsible for making the impossible possible in FM2K (Options menu, sound control…) with his freaky knowledge of knitting programminating and what we’re pretty darn sure is pure voodoo and sorcery. Beta is a friend of the team, and currently working on the creation of the Subatomic Engine, which will power some side projects a couple of our devs are working on; Ken and Beta will be the ones responsible for any adaptations needed on the Z-Engine; Ken in the tool/application side with algorithms, Beta on software engineering and graphics. Welcome to the team!

With us from the start are our three guys in the Music & Audio SFX department:

Stuart Ferguson (RC88) will be taking the role of Music Director for the game. You’ll sure remember him as the creator of the 1st, 2nd, 5th and 6th character themes for the previous game, as well as the game’s theme.

Working with him, Whitetail (3rd/4th Character themes for previous game) will be with the team as music composer. Yay!

Next up we have Ken McGill, who’s also been with us for a long while, and will continue on his role on the team as Sound Designer for the new game =)

And on our “extended family”, we have Oreo (Who, by the way, was the one responsible for some of the previous game’s videos), Klisk Midori and Cam McFarlane, from the FGB, who will (once we get to it in a few months) be assisting us as our Lead QAs.

So there you have it!, That’s our lineup for this game; Nonetheless, we expect to expand a bit in the coming months as some stuff starts being required.

…And since we’re already on that topic, let us cover one of the frequently asked questions lately: Hiring new people.

Right now, we’re not currently looking into immediate expansion, as we’re still in the pre-production stage of the project. In a future, we might require people, particularly for art and voice acting (For the record, we don’t yet know if we’ll be requiring any male VAs, in case you were wondering), but right now, is far enough into the future that we’re still fuzzy in the details. We’re less likely to be requiring people in the areas of music and programming, but one never knows for certain.

If you’re interested in joining our team, please keep an eye out in this site and in our twitter, as any announcements about open positions will be made in these places.

So all in all, progress is being made, and the project is slowly picking up speed. We’re talking the details and legal bits with Mike Z and LabZero on using their engine; Lauren and Core are still working on character designs, and we expect to have something more to say in terms of programming and engine as soon as we get our hands on it. =)

Oh, and… You may have (or may have not) noticed that the site’s look has been updated. It should load faster now, look better, and have lost all the holes and craters left over by the stuff that the C&D response had us strip from the previous version. It should work properly in Firefox, Opera and Chrome, and degrade gracefully in Internet Exploder (with a small exception in the top menu that will be fixed in a couple days, at most). Any bugs, please report via twitter to @Aleph42, and Anu will get on it. Please note that for the intents and purposes, Internet exploder is considered a “known bug” and irregularities on it shouldn’t be reported.