Fighting game music and you: a guide to all things dynamic.

Hi there. My name is Stuart Ferguson, but you may remember me by my old alias; RC88. I’ve been chugging away on various video game soundtracks for the last couple of years and, with the Mane6 crowd funding campaign quickly approaching, it’s time for me to talk about hooved fighting game music again.

Let’s cut straight to the point. We decided very early on in development that we should build a dynamic music system for the new game’s soundtrack. The idea of having the music react to combos, perfect rounds, special moves and character choice is totally delicious to me.

This special flavour is what I want to capture in this new games soundtrack. For this game I want to write music that feels like it really interacts with what is happening on screen and, ultimately, helps to strengthen that intense, flavoursome hype that is so unique to fighting games. That’s why I wanted to make a dynamic soundtrack for this game. I think having the music interact with the players is the best way that I can help to build that hype up. We had loads of ideas for dynamic elements to build, but before playing with all that fun stuff, I had a new skill to learn.

Diving into the deep end

The best way to start on anything new is to start simple; to work in a way that feels comfortable and not to expect instant results. Practice makes perfect.

Obviously when I first started working on dynamic music for this project I completely ignored those rules. At the time, there was very little in the way of dynamic fighting game music to base our ideas on, so we just ran with whatever ideas we could think of.

We wanted to do cool things like switch instruments out depending on what characters were in the match, time the beginning of rounds with the music and have different character melodies play depending on who wins the match. I started off using a piece of software called FMOD Designer. It was set out in a clear way, I could use it to implement most of the ideas we had and there were even a few tutorials floating around. Using a WIP version of one of the new character stage themes as a base I flung myself at the project. The software worked great and, despite looking very simple, quickly became very in depth and versatile. After a few successful tests I went ahead and built a full, working demo and quickly realised I had underestimated how difficult it was going to be. 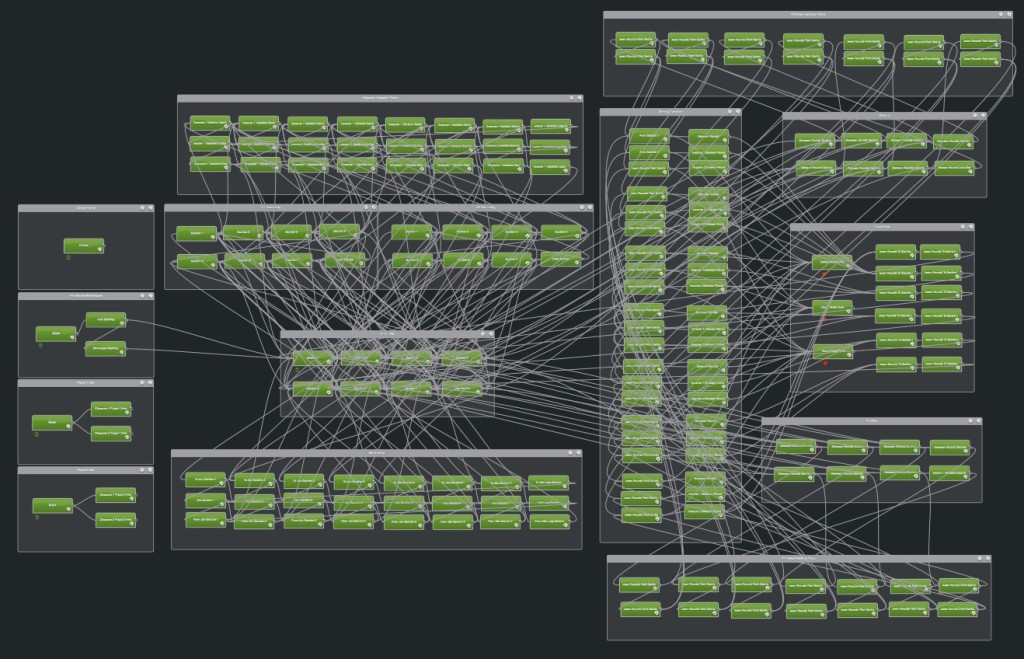 Yes it’s as messy and awkward as it looks. This is how the project looked after I had (mostly) finished the demo. Each of those white lines represents a path the music can take as it plays. Each path has to be planned ahead of time and the music must be composed and adjusted so that each path transitions seamlessly. With very few audio editing options in FMOD Designer, mistakes took a lot of fixing, and because of the way these transitions worked, you could only test a path after it was already fully implemented in the song. With 600 odd paths to worry about, things got pretty difficult pretty quickly. This demo only had working variations for two characters, it would become infinitely bigger as more characters were added to the game. There was some pretty cool things that the music could do in this setup, but it made me realise how big an undertaking all of this was going to be.

Diving into the deep end without breaking your neck this time

After a bit of a break to rest my aching brain, I gave another piece of software a try. I had initially dismissed FMOD Studio as being too simple for what we wanted to achieve with the soundtrack but judging a book by it’s cover is a stupid thing to do apparently. FMOD Studio can be a very powerful piece of software if you can trick it into doing what you want. There is very little info available for this software online, but I figured out a number of techniques that eventually let me do everything I could in FMOD Designer and even a couple of extra things I had initially thought impossible. The second dynamic stage demo turned out much tidier. This is a fully working demo which didn’t send me into boarderline insanity when building. Everything we wanted to achieve is here and working. Unlike FMOD Designer, there is no mess and there is plenty of space to expand when adding new characters. The announcer will always announce the new round in time with the music. This really keeps the energy up and despite the fact the gap between rounds is no shorter than any other fighting game, really brings a sense of urgency to the fight. If you want to jump straight into battle, you can skip the trash talking intros and start fighting, all in time with the music. There are character based melodies that play between rounds depending on who won and who was dominating. I even squeezed in a key change for the final round. Not only can we do everything we originally wanted to with this system, it won’t even kill me planning it all ahead of time. It doesn’t cost any more than FMOD Designer, so this is the system we will be running with as we go into the games crowdfunding.

OK fine we’ll show a little bit of dynamic stuff, but only using demo melodies and tester music that won’t be present in the final game. You’ll have to wait for the crowdfunding campaign for all that good stuff. The music in the following demos doesn’t represent how the games soundtrack will actually sound, just how elements of the dynamic music system currently work, also, disclaimer – None of the starter characters in the game will be into 8-bit music or 80s tunes, they just don’t dig that stuff.

Here are some character domination variations. Say Character A happens to love 8-bit music. Whenever that character is dominating the match you will be treated to a sweet 8-bit flavoured version of the stage theme. Character B loves rad 80s tunes? If she is dominating then you can expect the music to get pretty cheesy. Each character will have a custom version of every stage theme in the game, which can drop in and out whenever they are kicking the most ungulate arse.

Having high energy is fantastic, but what about when you don’t feel like diving right in to a fight? If both players are standing idle for long enough then the music will drop down to a nice relaxing version of the stage theme to fit the mood. Pointless? Yes. Silly? Most definitely, but pointless and silly things like this are a great way to add a nice little bit of flavour to a games soundtrack.

The stuff we can’t wait to show

I wish we could show you everything right here and now, but it we’re just whetting your appetite for the crowdfunding campaign. The stuff shown here is just the very tip of the iceberg when it comes to dynamic music. We will have all kinds of musical fun in the stages, and even the menus and character select screen will have cool dynamic elements. We haven’t even spoken about the fact all the characters will have character themes as well as their stage themes (think of them as a ‘musical bio’; a way to get to know the characters through their own songs), the games title theme or all the other music you’ll eventually be hearing.

I hope you guys are as excited to play this game as I am to be working on it.

Can’t watch the embedded videos?; No worries!, here are some mirror links