Now that the crowdfund has ended and the small amounts refunded have stopped (that’s normal, by the way; Failed payment processing and/or last-minute upgrade refunds that didn’t come through for a couple days), we have tallied the numbers (over 176,000 referrals!), looked at the lists and determined the winners of our Referral Rewards contest.

For those of you that don’t know, and for the people that might want a reminder, here’s a breakdown of the prizes. 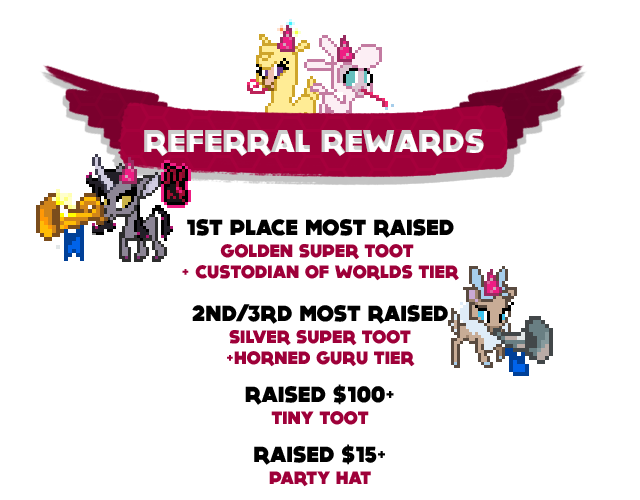 But, without further ado, here are our grand winners for the top three prizes.

with $8520 raised in Referrals

Prize: The Golden Super Toot exclusive lobby item, of which there shall ever be only ONE in existence, in addition to all the rewards in our $5000 Custodian of Worlds backer perk, including a coloured digital sketch by Lauren Faust, and an invite to a Skype call with Lauren and the team!

Prize: One of the only two Silver Super Toot exclusive lobby items each, in addition to all the rewards in our $500 Horned Guru backer perk, including the opportunity of getting an original character turned into a UNIQUE lobby sprite, which only the winner can use!

Congratulations to our winners, which have been already contacted by e-mail to be notified, and thanks to everyone who supported our project, both by pledging and by referring your friends!

Them’s Fightin’ Herds is becoming a reality because of you!

Also, keep an eye out for Pom’s entry in the Book of Lore, which should be coming up tomorrow!

Book of Lore – Chapter 4: The Strange One

Book of Lore – Chapter 5: There is no war in Baaaaah’s Sheep State
Scroll to top