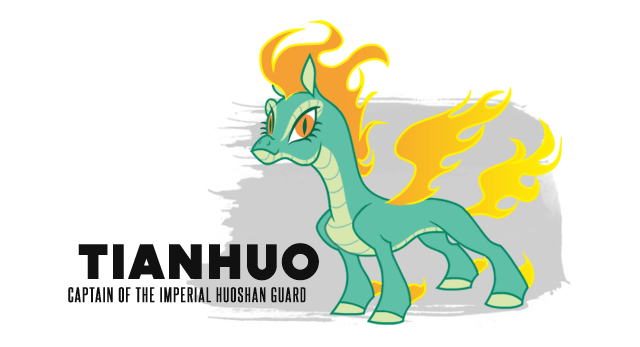 It’s time to kick this thing into high gear, and we have just the Key Keeper to help. She’s the fastest and most furious in Fœnum and we can’t wait to get to working on her. She stylishly completes our initial roster of six champions, so let’s go! Introducing the badass Longma, Tianhuo!

High above the clouds atop the highest of mountains lies the diminutive Empire of Huoshan (known to other Fœnecians as The Volcano), built over the gaping maw of an active, lava-spewing crater. The Empire’s subjects are Longmas, a very proud race who are half horse, half dragon. Every Longma is a member of the military, sworn not only to protect their beloved Empress (Daughter of Heaven, Empress of the Miniscule yet Mighty Realm of Magnanimous Magma, Lava, and Fire) and their honored volcanic home, but all of Fœnum itself.

It took the Empress not even a moment to make her choice for Key Keeper. Her name is Tianhuo, and amongst her people, she is undoubtedly the greatest the noble half-breeds have to offer. As Captain of the Imperial Guard, Tianhuo is the frontline defender of her Royal Highness! 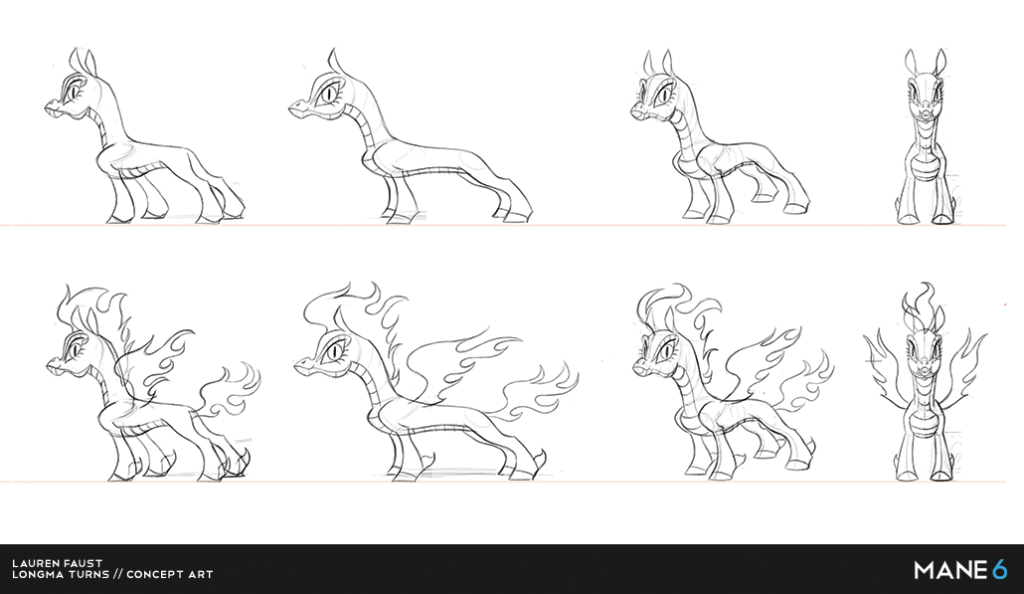 For certain she is an intimidating sight, emitting stoic confidence, but not a hint of arrogance. She has no disdain for her opponents. In fact, she greatly admires skill and strength and cannot enjoy a duel unless she faces a combatant who offers her a challenge… and it takes quite a combatant to stand up to her bat-winged, aerial attacks or the force of fire she is able to magically conjure when she reaches her greatest speeds. Indeed, not many are even able to get past the daggers that shoot from her fiery, dragon eyes when she stares you down. No one is more disciplined, no one more determined, and even the Predators’ Champion should beware.

Gameplay: Tianhuo, Captain of the Imperial Guard strikes from above, below and all around! Flexible, aerodynamic, and explosive, she is a real firecracker!

Flight-based attacks keep your opponent’s head in the clouds! Cancel any and all of your attacks into her Firecracker Magic attack to overwhelm your opponents, or use it to move quickly across the stage.

And here we go! Our Greenlight campaign is live.

For those of you who’re not quite sure what Greenlight is, here’s a short explanation. Greenlight is the method that indie games (such as ours) must go through in order to get self-published in the Steam platform. If you have a publisher, you get to skip this step, but since we’re 100% indie, we need to go through it.

What Greenlight does is puts the vote up to the steam community on which games should be going up on Steam. Once your Greenlight campaign has garnered a certain amount of interest, you’re allowed to publish your game on Steam, which, for us, would be a really good thing.

Not only would this make the distribution of digital keys easier, it would also mean we get to use Steamworks, which would allow us to distribute the game keys and the in-game rewards more easily, to add achievements, improve on the graphical lobby’s infrastructure, make updating and patching the game a lot smoother, and, very importantly, it would allow us to do a closed beta testing period for the backers of Them’s Fightin’ Herds.

If we do make it on Steam, everyone who has pledged, or pledges from then on to the Early Settler tiers and above will receive their digital key via Steam. Backers on the Guardian Sheepdog and above pledge tiers would also get an invite to participate in a closed, backers-only beta testing period for Them’s Fightin’ Herds prior to the game’s launch.

So here’s where everyone comes in. By going to the link in here, and responding to yes to the “Would you play this game if it were available in Steam?” let’s the folks at Valve know you’re interested in the game getting released through Steam. Once it reaches a certain amount of exposure, as mentioned above, we’ll be allowed to publish through Steam, so if you want to see it happen, please consider helping us there!

The crowdfund campaign‘s already over 27% funded, in only two days, but we still have quite a ways to go!, please help us by spreading the word, telling all your friends and using the social media link buttons in the campaign.

Thanks for your support so far!

New and restocked pledge tiers on the crowdfund campaign.
Scroll to top