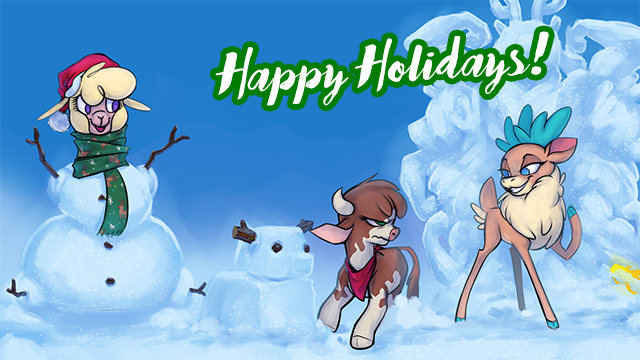 Merry Christmas! (if you celebrated it), and happy holidays!

It’s been about a month since we last made an update, so it’s probably time for another one.

Work in the game continues to move at a good, constant rate. Character models are progressing (currently working on Paprika), the cleanup from crowdfund version to working version proceeds smoothly, and we’ve got ourselves a new sound engineer who’s pretty awesome at it!; We’ve also acquired (as previously mentioned elsewhere) most of the licenses required to work in the game, made some administrative expenses, and we’ve also signed up with backerkit, which is a major thing.

Backers of Them’s Fightin’ Herds will be receiving e-mails from backerkit on our behalf, related to the delivery of physical and digital rewards through the project’s dev cycle(and after the project, where appropriate). For starters, the people who pledged to the Altruistic Seeker Goat (1.25k) and Champion of Foenum (2.5k/2.75k) tiers will be getting surveys on the plush rewards. The people who pledged for tiers with design participation (accessories, palettes, lobby characters and background characters) will probably be seeing the surveys on that aspect of their pledge rewards towards the middle of the development cycle. Most other physical reward surveys will be happening closer to game release (which is still on track for April 2017 or whereabouts). This is all due to the order of priorities we’re developing the game in (make it work before making it pretty).

There are still two outsanding rewards happening in the short term future. Wallpapers and backer forums. We’re terribly sorry these things have been delayed as much as they have, but they should be arriving during January (OR ELSE). Details will be provided via indiegogo update and distribution of wallpapers handled through backerkit.

We at Mane6 once again thank you for all your support, wish you a very happy new year, and can’t wait to keep travelling the development road towards making Them’s Fightin’ Herds a reality with all of you.

p.s. For a large-size version of the header image, click here!