Hailing from icy nation of The Tundra, the Deerfolk of Rein live in a rather privileged society, and an unusual one at that. For generations, the robust yet graceful animals have been revered and pampered by magical, elf-like creatures called Ice Sprites. Now, Ice Sprites are extremely strange in the world of Fœnum, being the only sentient creatures who walk on two legs, and no one really knows where they come from. But one thing everyone knows for certain is that they have an odd, obsessive fascination with reindeer —and the deerfolk are only too happy to indulge them.

With their magic, the sprites provide the deer with more than just food and shelter. They’ve built them a quaint yet stately city with some of the more sophisticated structures in Fœnum, buildings far more than mere practical protection from the harsh elements of The Tundra, charmingly decorated with warm, folksy iconography. In fact, for the Fœnum world traveler, The Tundra’s capital city of Rein is considered one of the most beautiful places to visit. And even more importantly, the food the sprites provide – golden oats – imbue the deer with their own magic, making them able to leap so high and far it seems they can fly, and giving them the ability to control aspects of the wintery weather of their homeland.

The snow falls lightly down onto the scalloped shingled roofs of the city of Rein, capitol of The Tundra. The thick, dark wood of the buildings and the colorful folk art painted around the doors and windows are only that much more lovely with the clean, white snow piling on and around them. The cobblestone streets trampled with the prints of dainty cloven hooves add to the feeling that this is a land of fairy tales. 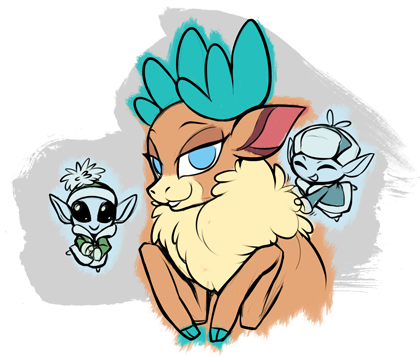 And here are some now. Well, not fairies, but Ice Sprites. Word that the world of Fœnum needs a savior has reached The Tundra, and these small, mysterious creatures with large eyes and pointy ears are bringing forth their own chosen ones with all sorts of fanfare. And the chosen ones are kind of loving it.

The most robust and powerful of all the reindeer in The Tundra are here to compete, the ones with the largest antlers, the thickest neck fur, the sharpest hooves, and the biggest egos, for each is convinced that it is they who will win the tournament that decides who will save the world.

Uttering a soft, squeaky language no one understands but them, the sprites parade their favorite “thoroughbreds” through the city, making their way to the stadium. Each deer is adorned with beads and baubles, finely woven wool capes, or have their great antlers painted silver and gold.

But one deer is the most flamboyant of them all. Accompanied by a legion of worshipful sprites, she arrives in a coach painted silver. The length of her immense satin train, blue and covered in icy jewels, falls not just behind her, but over the back of the carriage, sweeping the snow on the ground behind her.

“What is Velvet doing here?” many of the other deer inquire, rather snarkily. Despite her ostentatiousness, Velvet does not look as robust as the other competitors. She is lithe and delicate – hardly the makings of a warrior. But there is one thing she clearly has more of than her competitors, (which, it should be said, they have in droves), and that is confidence.

The competition begins, the first being feats of strength. 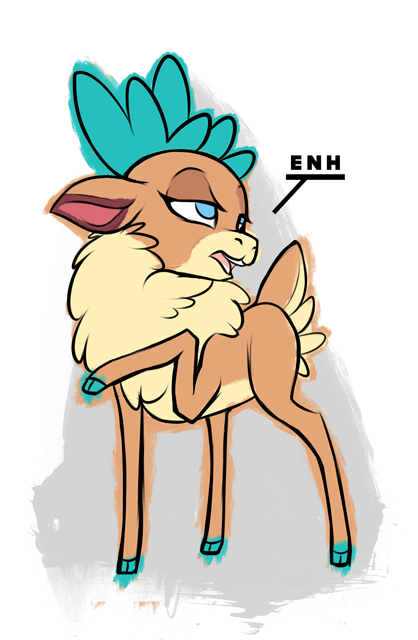 First, the deer must see who can pull a sleigh filled with the most logs. The strongest of them pull nearly 60 logs nearly 60 feet!

When Velvet’s turn comes up, she prances daintily to be harnessed. She pulls once against the harness. “Enh,” she exerts primly. Too heavy. She insists a log is removed. “Enh.” No good. One by one the logs are removed until there is only one left. That’ll do!

Lifting her knees high, she prances proudly around the arena pulling her almost-empty cart. Her sprites jump and cheer!  Her competitors’ jaws drop with indignation.

All the strength competitions go similarly. When they have to push a block of ice across a frozen pond, Velvet merely nudges it with her nose and takes a grand bow. When they all have an enormous stone rune strapped to their backs and are sent to run across a field as fast as they can, Velvet takes quick, tiny baby steps and makes the judges wait half an hour for her to cross the line.

Still, she finishes by smiling at her offended competitors who can only wonder how someone could be so proud of failing so miserably.

Then the next leg of the competition begins. Hoof-to-hoof combat. Muscle bound bucks throw each other to and fro with their massive antlers. Sturdy does tear at each other with their cloven hooves. Some of the deer have an extra advantage. They’ve learned a trick or two from their magical caretakers and can conjure up elements of the ice and snow to use against their opponents, flinging small icicles at them, or freezing the ground to make their opponents slip. But as the competition rages on, it is clear that only the strongest of the deer will claim the title of Key Keeper, and most bets are on a tall, intimidating chestnut buck. He is well known for being part of an elite team of eight chosen by the elves for a mysterious yearly ritual where they pull a red sleigh through the sky for just one night in deepest winter. It’s weird, but it’s an honor. The strongest of this team is Blitzen – also known as “The Blitz.”

And now The Blitz is about to face his final opponent.

And she is taking her sweet time. Motionless except for an occasional ear or tail flick, Velvet stands as several elves poof up her luxurious neck fluff, shine her antlers, and brush her coat to a satiny finish.

“Come on! This is a fight, not a beauty pageant!” Blitz calls impatiently across the stage as an elf polishes his back hoof. “You call that shine?” he hisses at the sprite under his breath.

As Blitz makes his way to the center of the stage, head and hooves high, smiling at his fans and jealous adversaries, Velvet still lingers. Her elves feed her from a large bucket filled with oats – but no ordinary oats. These glisten and sparkle like they were made of pure gold. And for just a moment, her antlers seem to, as well…

Blitz rolls his eyes as she prances and dances over to him at the center of the ring, blowing kisses to the completely silent spectators. He lets out a scoff of disrespect at the skinny doe, then steels his eyes, staring her down.

Then the bell! Blitz comes out swinging, tossing his antlers with his mighty neck! Velvet gracefully- and easily – dodges each one.

Blitz continues his advance, kicking and bucking, but Velvet stays clear out his way, putting on a show for the audience as she does.

“It’s that all you do, princess? Run away?” Blitz taunts.

“Bored are you? How about zis…” 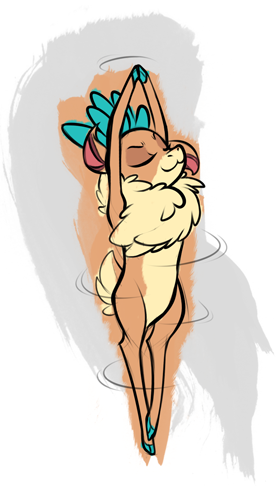 She lifts her front legs above her and pirouettes, spinning over and over with impressive speed.

“Come on woman! Stop dancing and fi- ” but before Blitz can finish, a massive, magical spinning column of snow and ice erupts from the ground and gobbles him up!

The column pulls him back over to Velvet, who finishes her pirouette with a spectacular pose – one so fabulous, it breaks the ice column, revealing Blitz, a frozen statue.

She smacks him – one two! Kicks him forward and, as her horns glitter with sprite magic, attacks him with ice projectiles over and over and over, until finally…

“Aye! I chipped a hoof,” she laments.

The spectators go wild – with enthusiasm or jealous rage is anyone’s guess, but either way is perfectly pleasing to Velvet.

Her league of sprites rush over to her like a pit crew and start fussing over her hair and fur and hooves, only slightly worse for the wear. They escort her to her silver carriage, placing her silk robes over her shoulders like a champion boxer.

As they pull her out of the arena to begin her quest as Rein’s Key Keeper, she blows kisses to the crowd.

“Güdbye my loves! I’m off to save ze vorld for you! Don’t be jealous now! Try to schpruce ze place up a bit before I get back. I’m talking to you, Vixen. By-eeeeeee”

Blitz finally regains consciousness. When his eyes regain their focus all he sees is the back of her procession. His eyes follow her long train from the ground up to her head. She turns, looks back at him and winks.