Sheeple, fleecy and white, were born and bred in the small city-state of The Meadow. They’ve taken up permanent residence there in settlements like the world famous township of Baaaaah, the charming village of Baaaaah, and the historic capital of Baaaaah. There the Sheep have built their own quaint, barn-like cottages as homes. It’s a very pleasant place to live with sunny blue skies, billowy clouds, and plentiful green grass – so much that the Sheep have not needed to migrate anywhere else for generations – and a good thing too, because they would probably get hopelessly lost and starve to death. You see, Sheeple are a democratic society. The Sheep follow the will of the masses, or the flock, if you will. Problem is all of the Sheep will vote in favor of the very first suggestion any Sheep happens to make. Yes, these ruminants will follow anyone who decides to lead – or whoever decides not to lead, which happens quite often.

Another interesting thing to note about Sheeple is that they live side-by-side with Sheep Dogs. You may be surprised by the notion of a predator not only existing in Fœnum, but actually living with prey. No one really knows how this came about. The popular theory is that the dogs are descended from friendly omega-wolves who were harmless enough to hide with the sheep while the rest of their kind were disappearing. Whether the sheep knew there were wolves in their midst is anyone’s guess. In any case, the wolves changed over generations, their predatory instincts evolving into protective ones. Now they serve the sheep as guardians, shielding the Sheep from harm… and their own vacuousness.

That’s the theory anyway. The Sheep cannot corroborate the story. Or understand it.

Court? Is this a trial?, Pom questions. I thought this was the Commons Chamber, where we’re supposed to come to vote.

She looks around the chamber hoping for more information. The room is large and round. The structure was built just a few generations ago when Sheeple first settled in The Meadow, so the wood shows only a little wear. The walls are stacked stone, white and gray, and the ceiling, thatched. Of course, these observations aren’t helpful, but Pom has never been at the Commons Chamber before, so it is at least interesting. Unfortunately, her fellow Sheeple are not so helpful, either. They only bleat in the general direction of their Prime Minister, and nothing about their demeanor offers her any reassurance.

I’m so confused. I shouldn’t’ve come. I don’t belong here. She is the youngest sheep in the room, tiny, with spindly legs and short, new baby fleece. A little lamb amongst stocky, round ewes and rams who resemble overweight clouds, especially the Prime Minister. Pom notes that his poofiness is the only thing more impressive than his spiraling horns. It must have been some time since he was sheered. She stifles a giggle speculating what sort of personal items he must lose in there on a regular basis.

“Now,” the Prime Minister announces to the room, “onto the first item on the agenda.” He speaks in a haughty tone, full of self-importance.

The bleating finally quiets. He slides his glasses up his long nose and reads from his notes lying on the podium. “’Regarding the feeding of the sheep dogs.’ Shall we vote?”

Oh yep, I was right, this is a vote. Still, Pom thought, why was he calling for order in the court when we’re in a chamber? I must be missing something. Oh, Pom, why are you so dumb?

This is the issue that brought her to the Commons Chamber. She has a small pack of four sheepdog pups who were given to her for protection, as all Sheep are given. In the short time she has had them, she has never seen them eat any of the grass that had been set out for them. She tried to feed them other types of food, like hay, leaves, and even flowers, and the dogs had no interest in anything that grew out of the ground. But somehow they thrived. She set out to find out why, and it led her to a fascinating discovery: the dogs hunt mice and rabbits, pests that would otherwise destroy their crops. All the green food left out for the dogs dries up or rots away. Green food that could otherwise go to needy sheep. This is the reason why she is here.

The Prime Minister continues, “Yes, you see, we’ve been feeding the dogs alfalfa, but the question’s been raised that perhaps we should instead feed them clover.”

“I already tri-“ Pom starts. All eyes shift to her. She shuts up.

I already tried that, she wants to shout, it won’t work! But she can’t muster the strength to say it out loud.

“Let us vote then, shall we? All in favour?”

The sheep all bleat, “BAAAAAAHHHH!!!!”

Being a sheep and having no gavel, the Prime Minister bangs his head on the podium to finalize the vote, BAM! “It’s decided then!” he declares.

What’s decided, then? I’m so confused!

The clerk, a ewe with a high, pinched voice asks, “So, is it clovah then, Prime Ministah?”

“Alfafa or clovah?” the clerk clarifies.

“Got it. Alfalfa.” the clerk confirms.

It takes the Prime Minister four hours to figure out how to phrase the question properly, and ultimately, clover is decided upon. And Pom never works up the nerve to speak the entire time. 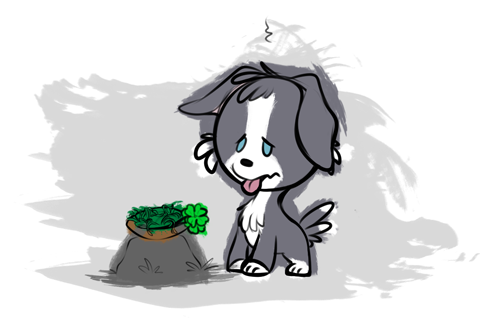 Pom leaves the chamber confused as ever. Like a good herding animal, she follows the flock from the town square of Baaaaah out into the countryside and down dirt roads with wood fences that wind through the green, grassy landscape. Intermittently, they pass clusters of cottages with thatched roofs and vining flowers. Rolling, grassy hills are always present in the distance.

As they go, the flock disperses as the sheep come upon their own villages, and eventually, Pom finds herself in her family’s pasture, happy to greet her puppies, Woof, Ruff, Tuft and Puff.

Why did they waste so much time voting on something so pointless?, she sighed with frustration. She knew the sheep dogs will never eat clove and now those crops will go to waste.

You should’ve said something, you egg! Frustrated with herself, she resolves that the next time the sheep are about to make a poor decision, she will not question herself. She will speak!

Suddenly, a pup growls. Pom’s stomach flips. All four of the pups stare at a thicket on the edge of the clearing, their hackles up, teeth bared. Pom shivers, too paralyzed with fear to even look for somewhere to hide.

The puppies attack! They charge in, snarling and barking. She hears a frightened scream!

Pom screams, too, as out leaps Woogums, her older brother! She breathes a sigh of relief, and they embrace.

“Pom!” he says, enduring an attack on his legs by affectionate puppy tongues. He pulls a scroll from out of his wool, his voice urgent, “I’ve an important message from our cuzzies, the Warmbloods of the Kaimanawa Range. They say it’s a matter of life or death!”

“Life or death?” Again Pom’s stomach flips over, her knees knocking at the thought. “Well?” she pleaded, “what does it say?”

He pauses. Isn’t the answer obvious? “I can’t. Th-there hasn’t been a vote.”

Pom sighs. Back to the Commons Chamber it is.

“Order! Order! Order in the court!” the Prime Minister cries, ramming his head repeatedly onto the podium. “We shall now put to a vote the next subject on the agenda,” he announces to the room.

“Shall we read the urgent, matter-of-life-and-death message from the Horses? All in favour?”

Pom holds her breath as he unrolls the scroll and reads aloud. The sheep listen, mouths agape, as the message informs of the impending return of the Predators, the threat to the entire world, the possibility of being eaten, and the need for a champion to keep it all from happening.

The sheep are stunned silent. 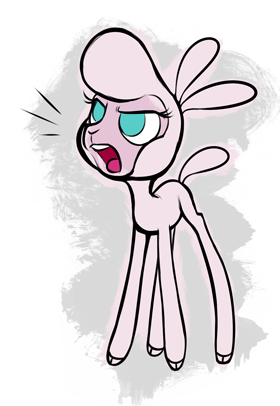 Then, PANIC! Pom can barely keep herself from fleeing while the flock races around the chamber, bouncing over and off one another, bleating chaotically.

“Order in the court I say!” the Prime Minister shouts, bashing his head onto the podium. BAM BAM BAM! The flock calms just enough to hear him call for the vote.

“Now, should we help the world of Fœnum and all the creatures in it? Should we find the champion of The Meadow? All in favour?”

Pom braces for the deafening BAAAHHH, but hears nothing. Nothing at all. All around her she sees the uncomfortable shifting, the eyes on the floor, and hears the low, noncommittal mumbles filling the air.

The cowards! Always they can be counted on to vote yes, but not now that the world needs them.

Then she remembers the promise she made to herself. She steadies her shaking knees, reaches deep down, finds all her strength and bleats loudly, “OF COURSE WE SHOULD!”

“All-for-voting-Pom-as-champion?” the Prime Minister blurts out.

Wait, what?! The herd surges towards her and lifts her into the air!

“All hail the champion of The Meadow! Baaahh! Baaah!”

The flock hears nothing. “She is so brave!” they cry. “She is so strong!” they exclaim. “Only the most mighty among us would state their own opinion!” Normally Pom would take note of how oddly direct these statements were, but she’s far too busy regretting speaking her mind and being utterly horror-struck by the task that lies ahead of her.

Pom and her pups stand at the border of The Meadow, looking out into the gigantic, unknown, completely terrified world.

The instructions she was given swim inside her head. What is this key she is supposed to find? Who is this monster she is supposed to face? How did I get myself into this? Pom, that was dumb as! What were you thinking? The uncertainty of it all has her paralyzed with fear.

The puppies nudge her forward. No one knows for sure what goes on in the minds of the dogs, but perhaps they know that this one is not as stupid as she thinks she is. And if they can keep her standing, she might just surprise everyone.