Q: So!, It’s mid May now. What have you guys been doing?, Why the long silence?

A: Well, that’s actually a pretty good example on why we don’t usually give out very specific dates: Stuff has a very constant tendency to go FUBAR when we do.

We’ve been wrestling the procedures to get the legalese bits of being an established company sorted out, so we could move on to crowdfund and development without fear of the IRS SWAT team storming through the window or sudden legal bombardments happening out of the blue, which is kind of important for a good development. We woofed up on our time estimate to get this done, and we’re sorry about that: What was meant to be a relatively painless process setting up as a company in the US dragged on when we found out the fact that half our team are actually not US Citizens or US residents would actually create more problems than we thought it would. Legal Paperwork multiplied, tax forecasts multiplied, consultants were consulted, meetings were met, inquiries were inquired, lawyers lawyered, options changed, plans changed, and lots more stuff happened to get it sorted up…

… And that ate up time, attention and resources from CoreDev.

But we’re finally set up!, We’re now officially Mane6, Inc. (No affiliation to Monsters of any kind, except probably stream monsters), and sans a couple internal documents that need to be drafted and/or signed, that should be the bulk of our pre-crowdfund legal setup. There are still a few wrinkles here and there, but those are more annoying to the individual devs than to Mane6 as a whole.

Which still leaves the rest of our pre-crowdfund setup to deal with.

What does that entail?

Crowdfunds are a delicate thing, which can fall into a catch-22 scenario quite easily. You need money to develop your project, which you can’t get without the crowdfund, which won’t succeed without a project to show in the first place, which you can’t develop without money… etc.

That said, we’re trying to give you guys a decent initial representation of what we’d like the game to be when we put it up for a crowdfund. We don’t want to just say “hey guys, we have a cute little cow here, give us your money or the cow gets to be lunch!”

The first thing we need, and the central piece of our crowdfund campaign is going to be showing you some in-engine footage. -Actual- gameplay, as opposed to just throwing our art assets on after effects, putting some flashy effects on top, movin’ them around, and calling it a day. Obviously, due to the early state of development, some of the art assets might be less polished than others, but in general, we want to give you guys a good first impression of the game’s mechanics. How it’ll play, and how it’ll look.

We’d like to have (and have been working on) at least one functional character up to a “showable” state (which is different from a “release-ready” state), and then one or two extra characters a little bit behind on the progress pipeline to demonstrate the procedure. Place those in at least one stage and show the new UI concept, which will greatly improve readability of resources (particularly the former “Magic” Gem from Fighting is Magic), and also show some of the music work that RC has been sketching up for the new game; One of the benefits of not working in FM2K anymore is that we can go NUTS with the music system, and we’re taking full advantage of that. We’ll give you more details during the crowdfund, but we can tell you: it’s pretty exciting for us, and we’re hoping it’ll be pretty exciting for you guys as well! 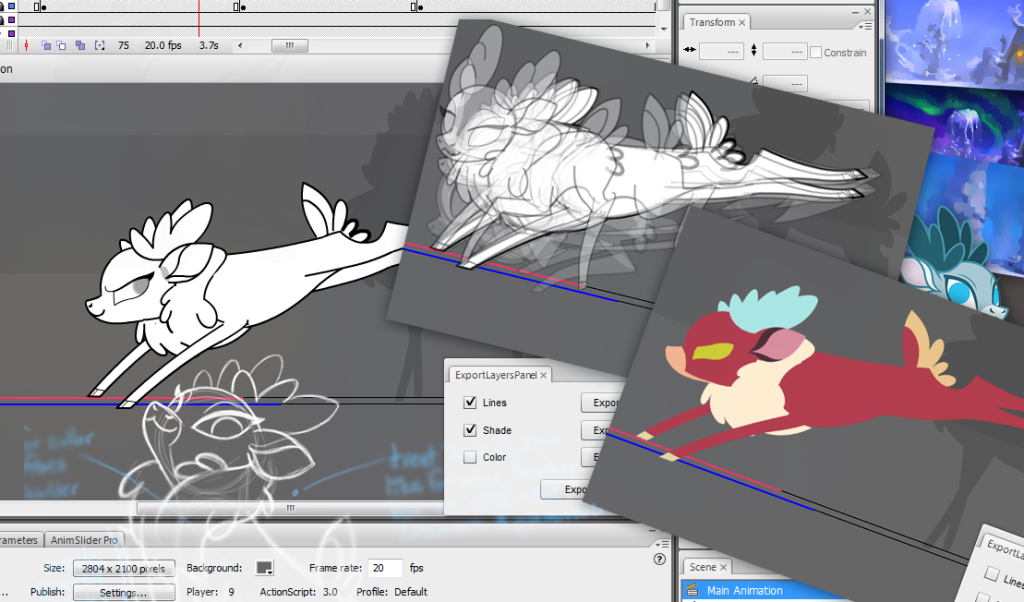 Here’s a bit of a preview of what we’ve been working on!

And lastly (in terms of visual content), we’re working on character splash art, their definitive colour palettes, and of course, on giving them a name. We’ve already made good progress in there, but legal checks must be passed first on that front. For that eventuality, we made a large list of alternative options in case the first try doesn’t work.

We’ve also been working on getting a plan for pledge rewards. We’d like to thank everyone for their suggestions when we asked on Twitter and Facebook, by the way. We’re taking your ideas in consideration. As a result, we have digital items ready to roll, and are looking at a variety of physical items, both in limited and unlimited quantities to give to people pledging to the mid to high tiers; It’s being a bit of a tough balancing act, as every physical reward created and shipped must be financed out of its pledge amount, and since the main purpose of the crowdfund is to -fund- the game, and not the rewards, we need to strike a balance between the pledge reward cost and the amount of money it will bring to our game budget. You can have a peek at our current WIP pledge reward chart (With the numbers blanked out as per the reasons above) in the following image.

And… That’s about it. With the legalese bits mostly taken care of (knock on wood), we’re now fully focusing on getting the crowdfund content up and running, and once we do, it’s Indiegogo time!

Social Media roundup and a bit of news.
Scroll to top