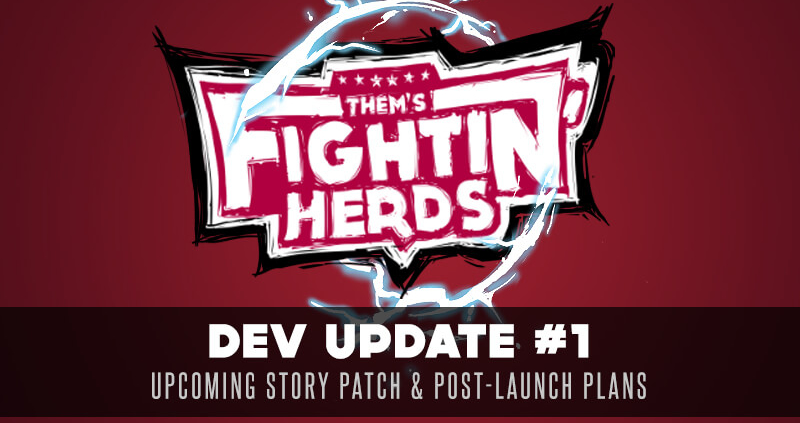 It’s been almost two weeks since the release of Version 1.0 and Story Mode Chapter 1. Now that the dust has settled (and a much-desired break has been taken), I’d like to offer up our thoughts on how we feel the release went and what’s next for TFH.

First of all (for those who missed it) we recently did a Story Mode commentary stream (in which I already announced much of what I’m about to say in this post). Check it out:

So then! Checking around, reviews for Story Mode have been positive overall and we’re getting a large influx of new players. If you’re new to TFH, welcome! Now that 1.0 has been released, there’s a whole lotta post-launch content we’ve got planned that we’re very excited to talk about. But before I get into it, it’s important that we go over our plans to address the #1 piece of criticism we’ve received about Story Mode so far: the difficulty.

A lot of players have been telling us that Story Mode combat encounters (mainly bosses and bird enemies) are just too hard (to the point of frustration) on lower difficulty settings. We’re releasing a patch this week that should help with that.

First, the AI needs to be easier to hit. We’re altering the frequency that AI blocks attacks and supers at lower difficulties.

Second, and more importantly: Story Mode does not currently teach players anything at all about TFH’s combat mechanics. From our perspective, this is the greatest contributing factor towards entry-level player frustration (over anything the AI is doing): not knowing how to fight.

Both AI tweaks and mechanical instruction are necessary to bring this all in line, because at the end of the day, we’re still a fighting game. Even if we gave players millions of health and the AI did only one attack, people are still gonna get tossed around if they don’t know how to block or what their most effective moves are.

We believe we’ve succeeded in teaching movement mechanics through the platforming trials, but conveyance of basic combat systems (how to anti-air, simple combos, and high/low blocking) is most definitely missing. To be completely honest: we had planned to include small combat tutorials in Story Mode with the original release, but they didn’t make it in time.

Brief tutorialization of fight essentials will be added into the earlier parts of Chapter 1. Emphasis on brief. We’re confident these expanded segments won’t interrupt the flow of things too much. We just want to offer a starter kit, so Tutorial Mode isn’t a prerequisite to wrecking face in Story Mode.

Now, here’s an overview of where our priorities currently stand for post-launch development. Including, but not limited to:

Check this post for instructions on how to redeem rewards, and to view a roadmap of our current progress:
https://forums.themsfightinherds.com/index.php?threads/backer-rewards-production-roadmap.2266/

If you need to update your shipping address, you can do so from Backerkit: https://them-s-fightin-herds.backerkit.com/

These were promised during our crowdfund and are also the first step on the road to consoles. Windows and Steam-dependent things in our code must first be genericized to give TFH the flexibility it needs to exist on other platforms. We’ve already done a lot of this work before the 1.0 release, and it’s now the engineering team’s highest priority.

We have started researching the process to get TFH to consoles, but our Linux/Mac work must be further along before we can start production here.

We’re working with Mike Z to bring his improvements to the existing GGPO netcode in Skullgirls to TFH as well, which will make online matches even smoother than they already are. While we’re at it, we’re taking another pass at our Pixel Lobby spectating system, and adding a few quality-of-life features like password-protected lobbies and fight request blocking.

Yup, it’s a mess! We’re tackling this one as soon as we release the improvements for online play listed above

The time has come for goat development to begin! She’ll be receiving near-full attention from Nappy (our combat design director) from here on out, with a design reveal and progress streams (while she’s still cardboard) happening as soon as we get things working at a base level.

There are existing balancing issues and bugs we’d like to address, and goat will inevitably create new ones. These will be worked on in tandem with her development. Some will be patched before and some as goat releases.

Development is already a decent way along in this area (check out our preview steam here), but as the saying goes, “the last 10% takes 90% of the work”. We need extensive balance testing before level 3’s are ready to roll out. Our aim is to begin work in this area after most of goat is complete so we can release it all at the same time… BUT… that is very definitely a best-case, blessed-by-the-great-priestess, S-rank, platinum-plated, rolled-a-20, 360-no-scope plan. Please understand, it’s still way too early to tell. Be prepared for us to make the call that goat is releasing before level 3s, depending on how development goes.

Preproduction on Chapter 2 (featuring Velvet) has already begun with Anu and I working out the specifics of narrative, overworld, and scenarios. Because Nappy will be needed to finalize the fight side of things (and he’ll be working on goat), goat will be released first. Afterwards, he’ll join the rest of the Story Mode squad to help finish things out.

As we shift the team into the drastically less-crunchy post-release period, we now have time to return to regular development updates and progress streams. It will take us a week or two to discuss and agree upon a schedule, but we’re committed to providing detailed, frequent, transparent updates on how things are going as best as we can.

If we didn’t mention something in this update it’s because it isn’t maximum priority right now. As we get further into the big stuff and as time allows we’ll be looking at all the other things we’ve expressed an interest in adding to the game. Please continue to offer feebdack!

Whew! That’s all for now. Until next time, watch for the upcoming patch!

OUR RESPONSE TO THE STATE OF THINGS
Scroll to top