THE FUTURE BELONGS TO THE YOUNG

Under a cornflower blue sky, filled with billowing white clouds, an enormous herd of cattle gather across an expanse of tall brown-green grass.  Their noses point to the center of the herd, focused intently.  Their homes, dozens of dusty covered wagons, surround the group. Mumbles of concern and curiosity mix with long, drawn out moos.

Their attention is fixed on a simple, newly constructed stage, the wood still pale and clean. A massive brown bull stands atop it before his herd. His horns are impressively long, sprouting horizontally from his head, their black tips curved forward just at the ends. He wears a heavy, wooden yoke to signify his station. He is the Head Bull, TEXAS. Beside him is a strong, blue-eyed cow, her short coarse coat patched white and tan, his wife, MINNESOTA.

“Gather ‘round friends, I’ve got news from outside our beloved home, The Prairie,” he calls out to the throng of bovines.  “We’ve all heard the tall tale of old, the story of The Horned Prophet, the little lady who locked away our old enemies long ago, keeping us safe to roam the country, looking for sweet grass and golden sunsets just at Mother Fœnum intended for her calves. Welp, I’ll tell you now, the tale, it was true. And the story, well, a new chapter is startin’. “

“The Predators, they’re a-fixin’ to come back.”

Minnesota tries to calm them, the last thing they need is a stampede.  “Now don’t get your tails in a knot, folks. There’s something we can do about it, don’tcha know.”

“Yup,” Texas continues, “the varmints ain’t here yet, and with the Prophet’s key, the lock can be mended. We can still lock ‘em back up in The Hold.  But it will take someone with strong moral fiber, someone rough, tough, and bull-headed to boot. So naturally, that means one of us – Cattlekind.”

Texas looks out to his people, some with faces twisted with concern, others with determination, others still, with anger.

“Are there any volunteers?”

The cattle rush the stage, moo-ing with purpose!

“That’s right,” Minnesota calls out and motions to a old rain barrel at the end of the stage, “just put’cher name there in the barrel, we’ll be pickin’ lottery style, don’tcha know.”

One by one, each Bovine presses their nose in a dish full of mud and slams it onto a piece of torn cloth, stamping it with their unique, individual prints. They fill the barrel to overflowing with their “names.”

“Spread the word to our brethren across The Prairie,” Texas informs them.

“Yah. We’ll be drawin’ the noseprint of the champion tomorrow mornin’.” Minnesota finishes.

For the rest of the day, bulls and cows from across the nation migrate to the main Wagon Train to throw their nose prints into the barrel. But it is not until late at night that the final name is added.

The entire herd sleeps as, under the dim light of a half moon, a small calf stealthily approaches the empty stage. As if doing something forbidden, the young one looks around carefully, makes the print and adds it to the barrel before quickly dashing away.

The next day, just after the sun rises, the herd reconvenes, eager to find out who among them will be chosen to save the land.

“Friends,” Texas announces, “get ready to meet your champion!”

Minnesota shoves her whole head into the barrel and emerges with the fateful name. Texas inspects it closely, then gasps in horror!

Minnesota, unable to speak with the print in her mouth, questions her husband with darting, concerned eyes.

“Our youngest daughter…” he cries out, “ARIZONA!”

The crowd gasps! Minnesota gasps! The noseprint falls from her lips to the ground before the hooves of…

The young calf!  She bravely stands the before the herd, determined to claim her title!  She is small, her horns only just budding, but she is sturdy and sure!

“Young lady,” Texas scolds, his voice a combination of fear and indignation, “what were you thinking! I won’t allow it!”

“Sorry Pa,” Arizona yells right back, unintimidated, “but it’s my right! I am Cattlekind, too, and I love The Prairie as much as anybody else.”

Minnesota steps in to reason with her husband, “It’s the law of The Prairie, don’tcha know.  Her name was drawn, it really is her right.”

Texas and Arizona face off, nose to nose, overprotective father against rebellious daughter.

“She is too young!” he proclaims.

“The future belongs to the young! Let a young one protect it!” she defies.

“Then it is my right, as Head Bull, to take your place!”

“Not unless I defeat you first, Pa.” 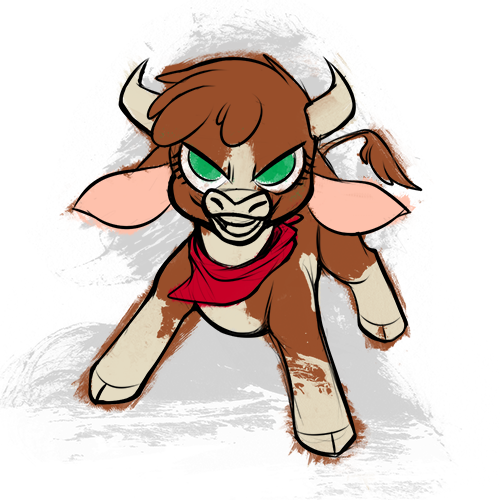 “Very well, calf. But remember, you mess with the bull…” Texas paws the ground and lowers his immense horns.  Minnesota rolls her eyes as he booms:  “YOU GET THE HORNS!”

“Hoo boy,” Minnesota says to herself, shaking her head, “here we go…”

Without a moment’s hesitation, Arizona rushes her dad.

He is prepared, though.  He lowers his head and throws her high into the air.

She flips nose over tail through the air and lands square on her feet, the force of her landing rocking the bull off balance.

Texas is surprised! Not just by her sass, but by her strength. He narrows his eyes, resolved to give her his all.

He rears up and brings his massive hooves down on her, but she is fast. She rolls and weaves between the furious stomps, unencumbered by the deafening booms of his hooves on the ground.

Finally, he pins her by the tail. “Ha! Don’t mess with Texas!”

The calf kicks him in the face! Stunned, he stammers back, releasing her tail.

They position themselves for a final face off, staring each other down. Texas lets out a mighty bellow and catapults himself towards his daughter! The entire herd is shaken by the thundering of his hooves.

Arizona waits a moment, then coils. She  lowers her head, raises her hoof, then POUNDS the dirt, rocketing herself towards the raging bull like a battering ram!

The impact throws him into the air!  But before he lands, Arizona banks off the side of the stage, twists her hind legs before her and lands a mighty buck square into his chest!

The herd watches, mouths agape as their powerful leader is launched into the air spinning uncontrollably, before falling with a cacophonous, booming THUD!

And when the dust clears, the bovines see their champion.  Arizona stands above – no, on – her fallen father, a vision of youthful independence and strength.

“No use crying over spilt milk!” she crows triumphantly.

Minnesota looks on, filled with pride. “Well done, little calf.” She says softly to herself, “Yah, you bet’cha.”

Texas gets up and watches as Arizona is swarmed by the crowd, cheering for their champion.

“Moooo!  Our champ-een!” they hoot and holler, “This calls for a hoe down! Git along little cowgirl!  Moooo!”

With a smug, knowing expression, Minnesota sidles up by Texas. He looks on angry, humbled.  With her great weight, she nudges him with her shoulder, knocking him off balance, if only slightly.

He gives her a side eye before looking out at his little girl, carried high on the backs of her happy brethren.  His face softens and a proud smile crosses his lips as Minnesota puts her head on his shoulder.

With a hint of a tear in his mighty, brown eye, he opens his mouth to speak.

Minnesota braces herself for the worst…

“The future belongs to the young.” He says, quietly expressing his approval.

Minnesota breathes a sigh of relief.  That wasn’t so bad.