The Fœnum world traveler is aware of the impressive level of technology its hooved inhabitants possess. Across the world, ungulates are able to build structures, irrigate water, and even create crude vehicles. But there are still societies who live lives of bygone eras, who have not changed since a time not long after ungulates learned to control fire. One of these societies is the Alpake of the Huacaya Mountains. The Alpake, or Alpacas as they are known more commonly, live as their ancestors have for thousands of years in the harsh, arid conditions of the Huacaya Mountain Range, which spans across the entire territory of The High Plains. They are wandering nomads; they go where the growing grass bids them. Always on the move, Alpacas must pack light and be ready to climb the next unforgiving mountain to find food. So their ways of living are simple. They utilize only what the High Plains is willing to offer them, whether it’s tall grasses to weave baskets, gourds to carry water, or clay and minerals to create paint and dye. They even use their own exceptionally soft wool to make their blankets and tents. They are resourceful, rugged, sober and serious. They exist to survive. Whatever the obstacle, they put their heads down and press on, just as their ancestors have for hundreds of years.

My name is Adobo. I come from what you and your tribe call The High Plains. You call us Alpaca, an endearing, if slightly insulting alteration of our true name, The Alpake of Huacaya. My people have survived the harsh environment of the High Plains for many generations. So many generations that we have lost count, but still we honor our ancestors’ ability to do what is hardest in The High Plains: survive.

The land, she does not love us. She is cold. So cold she freezes the soil so very few green things grow and we have little to eat. She screams wind at us constantly, her breath forceful and frigid. She tricks us, sometimes giving us small puddles of lakes to drink from, but other times providing us only water heavy with salt, mocking our thirst. So joyless is she, she rarely shares colors other than brown or gray.

But one of us is different. She is not so hardened, not so rugged – but soft, hopeful and vigorous, never seeking strategies for survival, but always seeking to fill the world with the love the land has never had for us.

Her name is Paprika. And she’s going to kill us all. 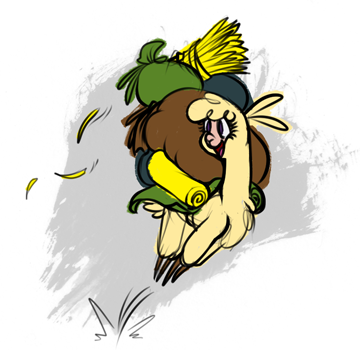 Once, the land around our village had grown barren and our watering hole had dried to nothingness. We packed our belongings onto our sturdy backs and set out to settle elsewhere. The cliffs of the Huacaya Mountians were sheer, and to ensure the safety of all, we tethered ourselves to one another so that if one of us should lose their footing, those climbing above them could keep them from falling to their deaths. But the strange one, she needed no tether. She flew up the side of the mountain despite the enormous amount of frivolous personal items she loaded onto herself. To our horror, she paused at each Alpake, stared deeply into their eyes and delivered them a crushing embrace! One by one we fell, until only I was left, struggling at the top, holding onto the rope that held my entire tribe dangling above demise. Paprika spared me – and all of us – with a peck on the cheek and a deathly giggle before skipping away humming a terrifyingly catchy tune. It was a miracle any of us survived.

Another time, high winds had damaged our tents severely. A sand storm was approaching, and we were desperate to repair the gashes in our shelters. Like many times before, we had to sacrifice our own fleece to weave patches before the wind could assault us with its stinging grit. Time was of the essence, so our precious fur would have to be trusted with the fastest weaver among us. Paprika. We closed our eyes tight against the sand that was already starting to pelt us. The strands of our fleece left our bodies in long, twisted threads, as if we ourselves were balls of yarn, making their way to the furiously weaving hooves of the strange one. When we finally found ourselves furless and naked, we looked over to our savior to behold the sheets of woven wool that would be our salvation, only to find that she had chosen to knit us all sweaters. “I heart Paprika” sweaters. It was a miracle any of us survived that day. 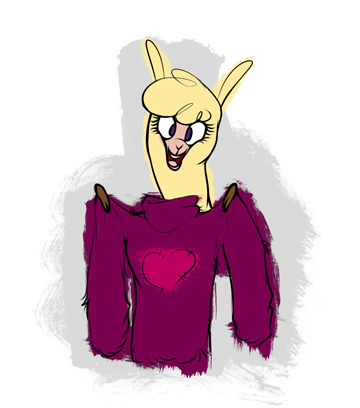 And then there was the flood. We would have been washed away were it not for a fallen tree that was only just big enough for all of our small tribe to cling to. We had to cling together, grasping and holding onto one another to stay afloat. Including the strange one. I had never seen her so happy. It was a miracle any of us survived.

Paprika was a natural disaster our ancestors did not prepare us for. The Alpake had finally met that which they could not survive. And so, we resigned ourselves to extinction, lying down to accept the eventual embrace of death that came with her embraces. Her bone crushing embraces.

Then one day, fate offered a welcome distraction from our despair. The morning light illuminated his silhouette – a hero returning from some unknown war.

“My son!” I cried as he appeared over the crest of the plateau. “I feared I would never see you again!”

He told us of the imminent return of the Predators and Fœnum’s need for a single champion.

“The leaders in the city are holding a competition in the capitol,” he explained, “they believe the champion should be from their nation. And father,” he put his hoof on my shoulder, “they consider the High Plains as part of that nation.”

The urgency of his words changed our hearts. We could no longer be resigned to extinction! We would break our seclusion from the outside world and go to the city. We would do our part to answer the call for a champion. It was our only hope for survival! 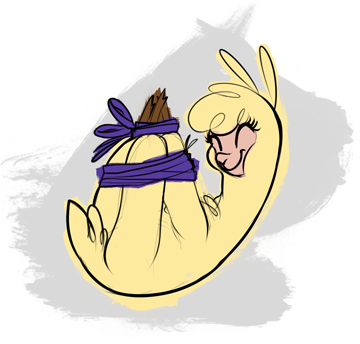 We set out to cross the mountains. We tied up the strange one and heaved her onto our backs so she could not endanger us on this most perilous journey. We crossed the vast, never ending salt flats. We braved hissing geysers of scalding mud. We climbed mountains so high we had to gasp for air.

Then, finally: civilization. My son guided us to an immense arena, the place where The High Plain’s chosen one would compete and earn their right to save the world.

This was our defining moment. This is when the Alpake of Huacaya would ensure the survival of our race. It was time to make our ancestors proud.

We dumped her on the steps of the arena and made a break for it.

It will be a miracle if the Predators survive. 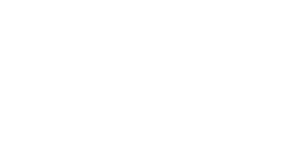