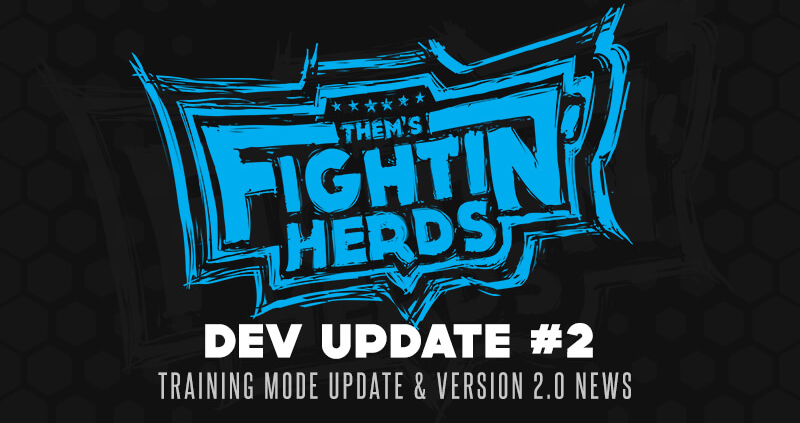 Since the launch of version 1.0 in late April, we’ve been focusing on improvements to the online experience in TFH to prepare for Evo Online and later Grand Stampede, including netcode enhancements, a reworked Classic Lobby, Battle Shrines, and more visibility on casual ranking.

Game balance has not changed much since the Early Access days, and it was important for us to keep it that way as we entered into the biggest tournament season TFH has ever seen, so players were fighting on familiar ground. Now that we’re on version 1.3 and have eased back into a “normal” development cycle, we’re planning some exciting new stuff to freshen things up a bit.

What We’re Working on Right Now

Before I get into game stuff, we wanted to touch on the fact that physical rewards are moving to production soon. That’s the movelist postcards, physical game copy, and physical soundtrack. If you’re getting one or all of these and your shipping address has changed since the crowdfund, please update it here: Them’s Fightin’ Herds on BackerKit

For instructions on how to redeem digital rewards, or to view a realtime roadmap of fulfilment progress on, check this post:
Backer Rewards Production Roadmap

For all other inquiries related to crowdfund stuff, please email contact@mane6.com.

Later in September, training mode will receive a dedicated update that fixes bugs and introduces new features, including but not limited to:

Native Linux and Mac ports were promised during our crowdfund and are also a vital first step on the longer road to console ports. The Linux, Mac and Windows versions will all run on Steam together (no additional purchase needed) and will be crossplay-compatible with each othe

A 7th character is coming to TFH: Shanty the Goat! If you haven’t already seen our Shanty gameplay reveal stream, check it out here:​

Development on Shanty is progressing well but she still needs a lot of testing, so as of now it’s still too early to tell when she’ll be ready for release.

When she’s released, players will be able to unlock Shanty by purchasing a DLC package that also includes her stage and Pixel Lobby avatar. All of our crowdfund backers will receive the Shanty DLC for free as a reward for helping us attain the stretch goal that made her development possible.

Regardless if you own Shanty or not, you’ll still be able to play against her online if your opponent has her, and she’ll also show up in arcade mode.

The introduction of a new character offers us an opportunity to shake things with a longer list of balance changes for all characters and (for the first time in awhile) a few universal systems. Whenever we make adjustments at this scale we’ll be moving up a major version number (hence going straight to 2.0).

A new Pixel Lobby map will be introduced in version 2.0: the Woodlands, Oleander’s home turf. Along with a new map, there will be a surge of glorious new hats to unlock. You can’t stop the hats.

Here is one of our tileset tests. Disclaimer: this is NOT the final layout of the lobby itself, and further refinements to the art will be made in the weeks prior to release.

What’s Next (In No Particular Order)

Exactly one person on our team does the combat stuff right now: Nappy. We’ve decided to continue holding on level 3 development until after 2.0 ships. You may recall that we’re already a decent way done with them (stream link here), but there is still a lot of testing and edge-casing to iron out, and we don’t want to rush it.

Preproduction on Velvet’s chapter is currently underway. When Nappy finishes his work on level 3s, he’ll join the rest of the Story Mode squad to script out the boss fights and close things out.

We have the backend tech to capture replays, but we are still in the process of designing the actual playback feature. When our engineers are free of training mode and porting tasks, we’ll be taking a look at this.

Ranked systems are very hard to get right, so we are taking our time on this one. We’re still in the research phase.

Though we’re still far away from it, we did want to mention that the work on Linux/Mac ports (cleaning up code and such) will help with console port development later on.

This is all the big stuff we wanted to mention, but it’s not an exhaustive list! There are plenty of little things that will go out alongside each of these updates.

As Shanty and other immediate features move along we’ll be sharing more about them. Thanks for reading, and have a great weekend!