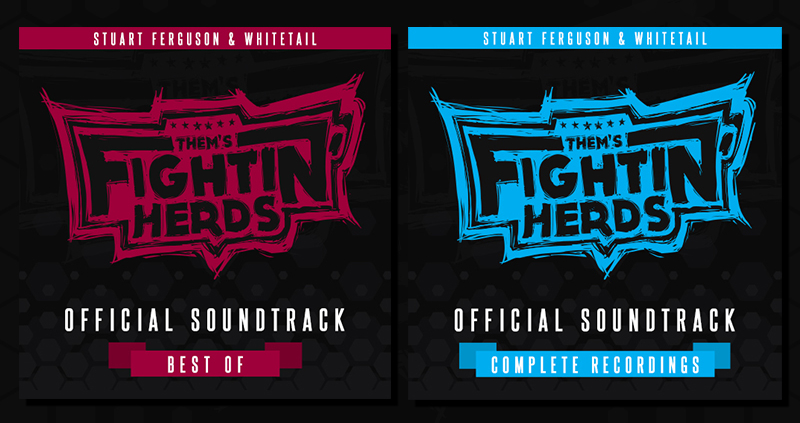 We’re excited to announce new availability for both the “Best Of” and “Complete Recordings” soundtrack collections for Them’s Fightin’ Herds. There’s a lot of particulars, so let’s begin with a short summary:

First, the “Best Of” collection may now be purchased here on Steam. Previously it was available via the musicians’ Bandcamp site (and it still is). It’s priced the same on both sites: $9.99 USD (subject to regional pricing on Steam).

Second, the “Complete Recordings” collection may now be purchased (for the first time ever), via Bandcamp. It’s split into separate packs that group tracks together by stage or feature, to make it possible to acquire smaller parts of the greater collection. Each individual pack costs $1.99 USD. We don’t have a bundle offering at this time.

What’s the difference between the two collections?
The “Best Of” collection is our general-purpose soundtrack that contains all base stage themes, character themes, pixel lobby BGMs, title/menu BGMs, and a bonus Reine City chiptune track. It’s an easy-listening “traditional”-style album with 22 tracks (at the time of this writing).

The “Complete Recordings” collection encompasses absolutely every single variation of every track we use for the game’s Dynamic Music System, including all unique character themes for each of the stages and character select, in both looping and non-looping mixes.

Do these collections include high-quality audio formats?
Yes. All official soundtrack collections have both MP3 and FLAC formats. On Steam, the FLACs are an optional download.

Will more tracks be added over time?
Yes. The game is still in development. As new music debuts (for example: in story mode chapters), we’ll expand the “Best Of” collection for no additional charge on Bandcamp and Steam. iTunes users will have to pay for the new tracks individually (sorry, there’s nothing we can do about that, it’s an Apple thing).

When a new track set becomes available, the dynamic variations will be gathered into a pack for the “Complete Recordings” collection to be released as a separate purchase.

Crowdfund backers will of course continue to receive track expansions according to their reward tier through Backerkit completely free of additional charge.

What happened to the pixel lobby track expansion on iTunes and Spotify?
At the time of this writing, we are still waiting for the musicians’ distribution “label” to add the latest tracks to those platforms. We are working on it and apologize for the delay. The process of releasing music on major platforms like those is more complicated than one might expect. When they finally do go through, we will make another announcement. Hopefully next time it will not take months.

So ends the FAQ section. Thanks for your support, and enjoy the moosic.